On July 16, 2021, the LA County Public Health Order was updated and requires that face masks be worn by all persons, regardless of vaccination status, while in all indoor public settings and businesses. The latest Health Order by be found HERE.

The City of Redondo Beach is commencing a planning effort to establish a framework plan to improve and enhance various public amenities within the City’s waterfront, commonly referred to as King Harbor. The City is seeking proposals from experienced and qualified consultants and or consultant teams to assist the City in preparing this plan. Interested parties may access the Request for Proposal HERE.

If you have any questions related to the RFP, please email waterfront@redondo.org.

LA County has met the state's threshold to enter the Orange Tier and will reopen new industry sectors. Starting on Monday, April 5, 2021, the Updated LA County Health Order will permit an increase to a wide range of indoor operations, all with safeguards in place. To read the latest Health Order, click HERE.

LA County has entered Phase 1B of the Vaccination Roll-out. COVID-19 Vaccinations are now available to all Persons 50 and Over. Beginning April 15, all persons 16 and over will be eligible for vaccinations. Click HERE to access the LA County Vaccine Information and Appointment page.

On January 29, 2021 LA County issued Surge Response modifications to the Health Order to permit for the reopening of certain businesses with updated protocols and to remove the closure of Lower-Risk Retail Businesses. Click HERE to view the latest order.

COVID-19 Vaccinations are now available to Healthcare Workers and persons 65 and over. To make an appointment, please visit the LA County Vaccine Appointment page HERE.

New County Grant Available to Restaurants - up to $30k

Supervisor Janice Hahn announced the "Keep L.A. County Dining" Program providing up to $30,000 to small businesses located in Los Angeles County, not including the Cities of Los Angeles and Pasadena, that can show their business was impacted by COVID-19. Interested businesses may apply HERE. Please note, the site occasionally has technical issues.

PREFERRED BUSINESSES: Restaurants that provided outdoor dining as of November 24, 2020, will be given preference and selected based on order of submission.

INELIGIBLE: Businesses that have already received assistance from other Los Angeles County CARES Act or COVID-funded programs, are not eligible for this Program.

On November 25, 2020, LA County released updated Health Orders limiting restaurants, breweries and wineries to take-out, drive-thru and delivery service only. This modification to the Health Order goes into effect November 25, 2020 at 10 PM and will remain in place until December 17, 2020.

A November 22, 2020 Press Release from the LA County Dept. of Public Health limits restaurants, breweries and wineries to take-out and delivery service only. This modification to the Health Order goes into effect November 25, 2020 at 10 PM and will remain in place for at least 3 weeks thereafter.

On October 14, 2020, the LA County Department of Public Health issued an updated Health Order to allow for private gatherings of persons from no more than 3 households. The updated health order may be viewed HERE.

The hand launch located behind Seaside Lagoon will be closed for winter repairs from November 16 to mid-late March. During this period, visitors can launch hand carried personal watercraft from the Redondo Beach Marina. The ramp is located south of the boat hoist crane structure.

10.05.2020 - Updated LA County Health Order allows for the re-opening of salons, cardrooms, and indoor malls and shopping centers in limited capacity. Business reopening guidances have been uploaded to the LA County COVID-19 Response Site under the Protocols for Reopening headline.

On August 28, 2020, the state released the Blueprint for a Safer Economy, a four-tier system in which counties must show consistent success in stemming the transmission of COVID-19 before allowing businesses greater flexibility to reopen and group activities to resume. To review the tiers and see the status of LA County, visit the state’s site here.

The City of Redondo Beach continues to follow LA County Department of Health protocol in the re-opening of local businesses. To see if and how your business can re-open, please review the regularly-updated LA County COVID-19 Business Summary Sheet.

On June 29, 2020, the Los Angeles County Department of Public Health issued a revised Public Health Order aimed at slowing the spread of COVID-19 by temporarily closing LA County beaches, LA County controlled beach parking lots, beach access points, and piers. The closure period begins at 12:01 AM on Friday, July 3, 2020, and will continue until 5:00 AM on Monday, July 6, 2020. Portions of the Redondo Beach Pier WILL REMAIN OPEN for business. For further information, please visit the City's Harbor page here.

Update: The Redondo Beach Pier is Now Open to Visitors

Per LA County Health Officer Orders released on June 11, 2020, the Redondo Beach Pier is now open to residents and visitors. For updates and upcoming events, please visit the Redondo Beach Pier website. Visitors are able to find parking throughout the Harbor. Further information and directions may be found here.

Per orders released by Governor Newsom on June 18, 2020, it is mandatory to wear a face covering in public in the state of California. For further information and details on exceptions, please refer to the CA Department of Public Health's Guidance on face coverings.

Revitalize a core landmark in a vibrant seaside community with a rich maritime tradition through providing new opportunities for recreation, local businesses, and public spaces thoughtfully designed to enhance the collective experience while preserving natural resources.

The small boat launch will be closed for its biannual repairs and winter storm preparation. For an alternative boat launch, go to the Marina Office located at 181 North Harbor Drive. It is located on the International Boardwalk south of the R10 social house.

January 28, 2015
In Redondo Beach, we are truly fortunate to have the opportunity to observe the yearly migration of the majestic gray and humpback whales.
Sharing the Ocean Read More »

Free Parking at the Pier and Boardwalk!

December 12, 2014
Come visit the Redondo Beach Pier and Boardwalk! Parking is FREE at the City's Pier and Plaza parking structures between 8am and 8pm through January 2, 2015!

September 2, 2014
Help us turn the Redondo Beach Pier into a concrete canvas! This annual all-ages family event is FREE and open to the public. Prizes awarded!
Flyer

FREE Yoga On the Pier!

Earth Day 2014 Celebration at The Farmers' Markets in Redondo Beach

January 21, 2014
The City will host two public meetings on February 6th and 27th to solicit comment from the public for a potential new boat launch within King Harbor.
Seeking Public Input on a Potential New Boat Launch Read More »

July 31, 2013
Redondo Beach will launch an environmental review of a project to revitalize the waterfront with restaurants, shops and a boutique hotel.
News ArticleLA Times: Redondo Beach Set to Move on $300 Million Makeover Read More »

June 24, 2013
Come to the City Council Meeting Tuesday, July 30th to express your input on the proposed revitalization concept by CenterCal Properties. The concept is the culmination of eight public meetings that began in fall of 2012 and ended in June 2013.
Redondo Beach Waterfront Read More »

June 4, 2013
Join us for another dynamic opportunity to share your ideas about the future of the Waterfront. Thursday, June 13 from 6:00pm-8:00pm at the Performing Arts Center (1935 Manhattan Beach Blvd).
Waterfront Planning Workshop Read More »

June 3, 2013
Please join us for the final waterfront workshop and help spread the word to your friends, families, and neighbors! This is another great opportunity to share your thoughts and ideas with our partners at Centercal Properties as we take the next steps in the revitalization of our Waterfront. Refreshments will be served. We look forward to seeing you there!

November 20, 2012
The Redondo Beach Waterfront Revitalization continues at the Pier with the addition of Barney’s Beanery to the Redondo Landing.
Coming Soon: Barney's Beanery! Read More » 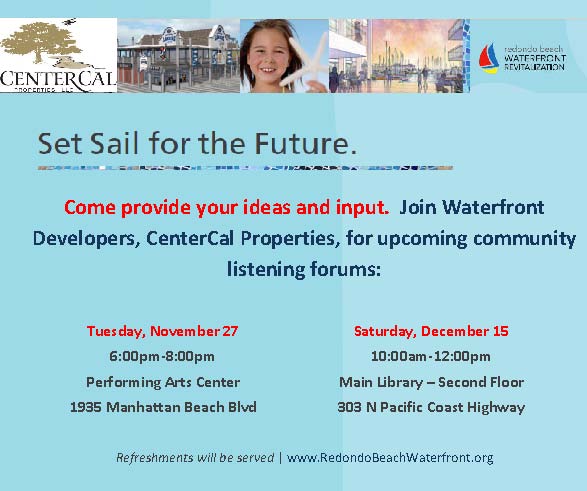 September 18, 2012
The Redondo Beach City Council held a public workshop on September 13 the City's Main Library. The City Council heard presentations from a group of qualified developers regarding their vision and approach for waterfront redevelopment and took public comments. This developer evaluation and selection process is the next step in the exciting Waterfront Revitalization. Please see following link to view the presentations given by the developers and the video of the meeting .
REDONDO BEACH WATERFRONT REVITALIZATION DEVELOPER WORKSHOP Read More »

Set Sail for the Future

The replenishment operation made up some time and the onshore replenishment is complete. The barge (Paul Lee) has left Redondo Beach and the contractor will be moving equipment off of the beach today and tomorrow. Per last week’s meeting, the project is expected to be completed on October 15 and completely demobilized on October 22.

Summary
As part of U.S. Army Corps of Engineer's Marina Del Rey Maintenance Dredging Project, the beach area between the Topaz and Ruby street intersections will be nourished with 75,000 cubic yards of clean sand. An additional 85,000 cubic yards of clean sand from Marina Del Rey's north entrance will also be deposited in an offshore storage site (approximately 500 yards offshore/southwest of the Topaz Street lifeguard tower) for future renourishing efforts.

The nourishment operation will include the pumping of clean sand from a barge stationed in the ocean waters through a pipe to the beach. A spreader (i.e., bull-dozer) will distribute the pumped sand along the beach within the project limits. The nourishment will occur continuously in a 24 hour period for approximately 45 days.
Redondo Beach - Beach Renourishment Project Read More »

July 24, 2012
Historic Pier & Harbor Makeover Will Create a Once in a Generation Opportunity to Redefine the City's Waterfront Redondo Beach Mayor Mike Gin has announced the launch of the City's Request for Qualifications (RFQ) for a rare waterfront development opportunity, covering more than 15 acres of oceanfront land on the city’s Waterfront.
/civica/inc/displayblobpdf2.asp?BlobID=24422City of Redondo Beach Announces RFQ as the Next Step in Waterfront Revitalization Read More »

November 29, 2011
Please join Redondo Beach Mayor Mike Gin, City Officials and Private Business Leaders at 10am on December 6th for the formal commencement of the Redondo Beach Waterfront's first and most significant redevelopment in decades!