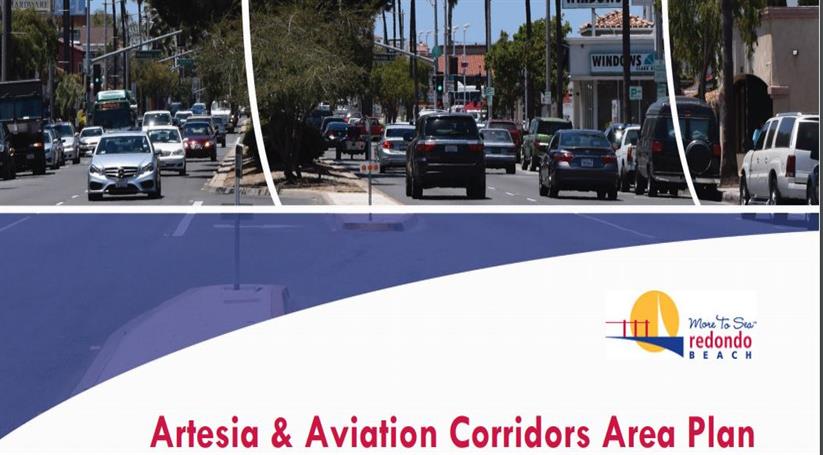 The City Council will hold a public hearing to discuss the Draft Artesia and Aviation Corridors Area Plan (AACAP) at their virtual meeting on Tuesday October 6, 2020 at 6:00 p.m.  You may submit questions and/or comments to the City’s Planning Division by email to PlanningRedondo@redondo.org.  Comments for the City Council will be accepted up until the day of the meeting at 3:00 p.m. Copies of any written comments will be distributed to the City Council.

Guided by the General Plan Advisory Committee (GPAC), the City has prepared the Draft AACAP (available for download here), which provides a road map to transform Artesia and Aviation Boulevards into the “Main Street of North Redondo,” by outlining strategies to activate, energize, and revitalize the Corridors through thoughtful placemaking efforts, including strategies to:

The AACAP also memorializes the various efforts that have examined the opportunities to transform the Corridors over the past decades, providing an accessible collection of community desires, ideas, and strategies to promote changes that further the community’s vision for the Corridors.

Public participation in the AACAP

The first draft of the AACAP was released for review in September 2019. The Draft was presented to the GPAC (September 26, 2019) and the North Redondo Beach Business Association (November 14, 2019). In January 2020, comments from both groups were incorporated into the AACAP and a revised Draft was issued. A community-wide workshop was then held on February 27, 2020 to facilitate discussion and collect feedback from the broader community.

Between February 21, 2020 and March 31, 2020, the City also hosted an online survey, open to any community member, business owner, or interested party, to determine which strategies in the AACAP were most important to the community. The survey identified AACAP implementation actions, and asked respondents to rank them in the order of importance. A summary of the survey results is available here.

The upcoming meeting will be livestreamed on the City’s website at https://redondo.legistar.com/Calendar.aspx, as well as broadcast on the City’s local television channels (Spectrum Cable Channel 8 and Frontier Communications Channel 41).

Thank you for helping to chart the course for the future of the Artesia and Aviation Corridors!