Sorry, this page has moved!
Please click here to go to the new location.

On February 6, 2007 the City formally received an artifact from the World Trade Center and raised $1,500 in funds towards a permanent memorial to honor the victims of 9/11. A gift from the New York City Fire Department, the artifact was secured through the close relationship that has developed in the last five years between Redondo Beach public safety officers and their families, and officers in New York City and their families.

Approximately 100 people attended the event which took place on Tuesday, February 6, 2007, from 4:00 to 5:00 p.m. at the Redondo Beach Performing Arts Center, 1935 Manhattan Beach Boulevard. As the audience sang "America the Beautiful" the 300 lb. piece of steel from the World Trade Center was carried in by two police officers and two firefighters, accompanied by the Redondo Union High School JROTC.

As master of ceremonies, Mayor Mike Gin acknowledged City Officials, legislative representatives and other guests who included family of a man killed in the WTC collapse, and a representative from American Airlines. Fire Captain Bob Franck and Jessica Sigler (daughter of Police Agent Rich Sigler) provided moving comments relating to their experiences of the 9/11 event, their visits to the City of New York and relationships with the public safety officers and families over the past five years. 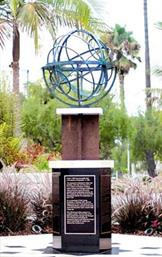 To donate to the 9/11 Memorial Fund, make checks payable to City of Redondo Beach, note "9/11 Memorial" on the check, and mail it to the Financial Services Department, Attn: Cashiering, 415 Diamond Street, Redondo Beach, CA 90277. Donations are tax deductible: Fed ID# 95-600767.